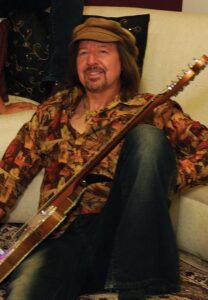 Sky Athmann, the “Anthem Man,” is a walking paradigm of the 1970’s and a Tom Sawyer of the twenty-first century. This curious singer, songwriter, musician, producer, instrument repair extraordinaire, and overall “musical genius” is on a journey to recapture the timeless essence of his childhood era and share the magic in song, with an extensive original library of music, exceeding into the thousands.

Inspired by the sounds of Simon and Garfunkel, the Mamas and the Papas, ABBA, and Fleetwood Mac he has taken his music to an entirely out of this world experience. With intricate vocal harmonies and complex instrumental arrangements his songs become ageless anthems that feel like reconnecting with a long lost friend.

A seasoned studio professional, Sky enjoys the artistry of crafting a good song, however his true passion lies in performing on stage and bringing his music to a larger audience.